281 of these occurred between June 1st and August 31st, and 41 of those were for victims 15 years old or under.

Now that school is out, drivers need to be aware that children will be ‘out and about’ at all times of the day and night. Nationally, the worst time of day for child pedestrian injury is between 3 and 7 pm, during which time 36% of fatalities occur.[i]

Pedestrian injury is more common when children are outside playing in the summer and the vast majority of pedestrian crashes actually occur under optimal driving conditions in full daylight, when the road is dry, and in the absence of precipitation.[ii]

MedStar offers these simple recommendations to reduce the incidence of pedestrian accidents in the Fort Worth area: 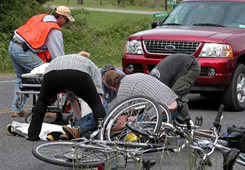